NASA/JPL has designed fourteen visionary posters for everyone and anyone to print and hang up for free at home. These retro posters envision the future where engineers and creatives have allowed us to do things we can only dream of in the present day.

Originally, a creative team at JPL (jet propulsion Laboratory) – known as the “The Studio” – created five posters depicting life on other worlds for the “The Exoplanet Travel Bureau Poster Series” (which we printed), and that innovative set has recently been expanded with nine additional poster designs.

Nine artists, graphic designers, and illustrators were instrumental in designing the posters. The final images are the result of numerous brainstorming sessions with scientists, engineers, and expert communicators. Each poster design went through a grueling number of concepts and revisions before being approved.

On NASA’s website, the Visions of the Future page, you can click on each poster image to learn more about each scenario. 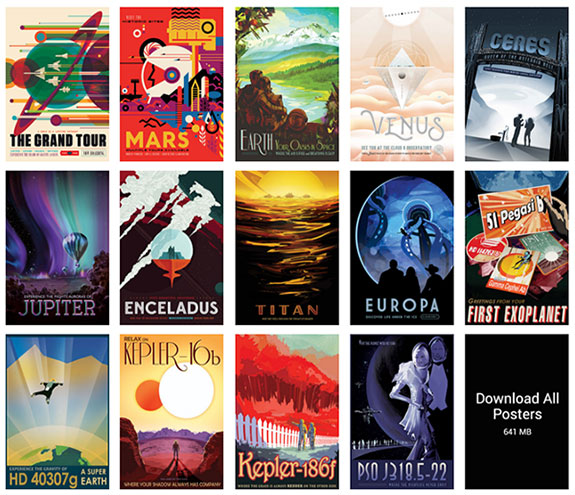 Each file is intended to be printed as 20×30, but they can be easily resized using any competent graphics software like Adobe Photoshop. Our company, Printkeg, has printed these posters before for NASA/JPL and individuals in numerous sizes including 11×17, 12×18, 20×30 and 24×36.