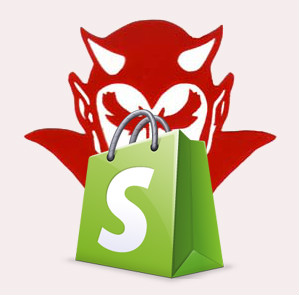 First and foremost, I want to clearly state for the record that our company is a firm proponent of the e-commerce platform, Shopify. We utlize the platform for two stores and our web development sister company, IDM Print, strongly recommends it to prospective clients searching for a powerful tool selling goods online. Like any system, there are some serious drawbacks with Shopify that should be considered by e-commerce newcomers. For us, these drawbacks did not outweigh the benefits, but that might not be true for everyone.

See 5 Reasons Why We Chose Shopify.

1. Variants are awesome, but limiting. Adding form options is not always simple.

What is a variant? Variants are Shopify’s method of handling form options (add-ons, colors, sizes etc.) for products.

Storeowners with products requiring many option selections and customizations may find Shopify severely limiting. For instance, individuals selling t-shirts with only a few sizes or color options, Shopify is great. However, if you offer many styles, colors, sizes and customizations, then it may become cumbersome or downright impossible to offer all the options within the core Shopify application. You will be required to take advantage of a third party application to simplify workload and offer all the options necessary.

If you look at our Flyers Page, we could only fit three options within Shopify’s core platform: Size, Paper, Quantity. Due to limitations on variants, we had to utlize the third party app, Product Options, by Bold Apps. Without that app, we could not add the FIVE other options we needed.

Also, you can’t add form items like file uploads, text boxes or anything else without using a third party app. Remember, third party apps are not free. 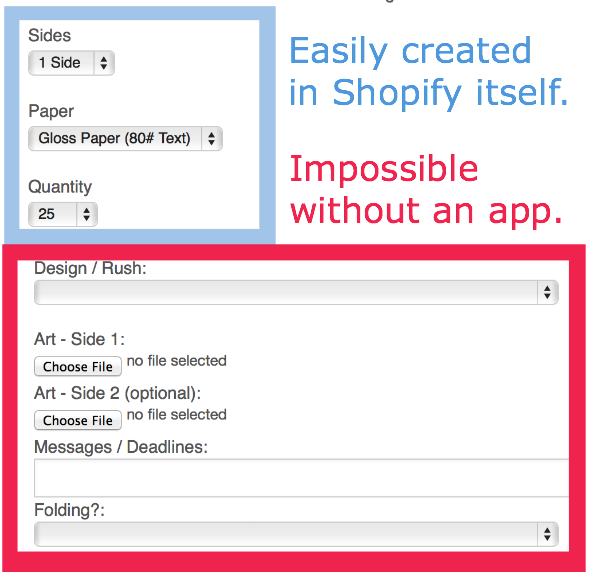 And this brings us to our next issue.

2.Too much reliance on third party apps

I really hate to bash on Shopify because I truly love the platform. It is simple, elegant, easy to use and sophisticated in many ways. Unfortunately, I don’t see how any successsful storeowner can go without using third party apps. One main problem with this is the fact that Shopify’s price plans are somewhat misleading since there is no real way to function without utilizing third party apps. The core Shopify product offers horrible reporting, no quantity breaks, limited form capabilities, no order management system, no control over statuses…the list goes on.

Shopify’s dependence on third party developers is great for developers and Shopify. Developers make money and Shopify faciitates an environment where developers actually want to make applications for their system. A win-win for them, but all at the consumers’ expense. Shopify likely boasts the largest app market for e-commerce solutions which sounds wonderful – until you realize how barebones Shopify itself is.

Our company couldn’t even use Shopify without Bold App’s ‘Order Manager’ app which allows us to create custom statuses since Shopify doesn’t offer that feature.

3. Apps are not properly reviewed by Shopify.

This is my opinion of course. But, apps should be more thoroughly reviewed by Shopify’s app team.

In the beginning, I was very excited about all of the apps in the Shopify app store. Unfortunately, many of them do very little or do not function correctly for a variety of reasons. This is aggravating because I’ve had to uninstall many apps which I had high hopes for. For instance, one app claims it allows you to edit orders. It doesn’t. And no, you cannot edit an order in Shopify.

Many apps require code to be manually injected within your template which can cause a number of problems. There was one reporting app we absolutely loved, but it was detrimentally slowing down our website which is bad for business. Some app makers will install necessary code for free while others will charge a fee (Bold Apps charge $50!). This isn’t Google Play or Apple’s App Store where apps just work after installation. One major problem of adding code to a theme template when installing an app is that added code should be removed if you decide to ever delete the app.

Don’t get me wrong – some apps are wonderful. Shippo is one we absolutely love, and it does what it is supposed to do, and it was easy to install. Even though the Shopify app market is riddled with poorly run apps, there are many killer apps available too.

4. Secure checkout is through a Shopify domain

In Shopify’e defense, there is an enterprise plan with the monthly charge of a whopping $1000 that allows storeowners to use their own SSL Certificate and domain name during checkout. Yes, one thousand dollars a month. That’s pretty steep when the competition offers far cheaper methods of owning your own secure domain.

Otherwise, you will have to use Shopify’s domain during checkout. I have no idea if or how this affects conversion rates. I have noticed that many people have never heard of Shopify so being redirected to a Shopify domain might be scary to some shoppers, but the system is extremely secure.

The below image was taken from a page Volusion uses to slam Shopify and shows a huge yellow warning on the Shopify domain (which I have NEVER seen happen the entire time we have used Shopify). More importantly, this image does accurately demonstrate how people will be redirected using Shopify’s checkout method. Just look at the address bar. 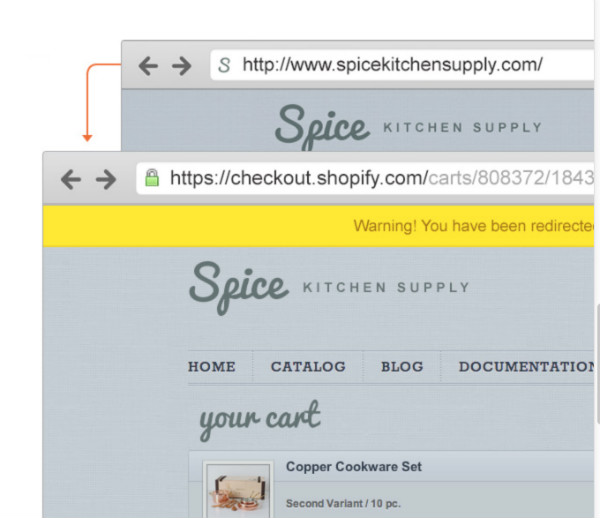 5. You are basically coerced into using Shopify’s payment processor.

Shopify offers it’s own payment processor which makes it very easy to get started accepting online payments. There is no need to connect to third party processors like Authorize.net. However, storeowners who don’t utilize Shopify’s card processor will have to pay 2% of all sales. That’s on top of whatever credit card charges are paid out using third party processers. Let me see, should I pay 2.25% +.30 per transaction or 4.25% (+ whatever) of all transactions? Curse you Shopify. Curse you.

Shopify has always been attacked for charging 2% of their customers’ revenue. I was actually thankful Shopify relinquished the fees for those opting to use their processing since our company had no love for the merchant we were working with anyways. Some companies have negotiated lower rates with their banks and processors, and those rates must likely be sacrificed if Shopify is the preferred e-commerce solution.

Shopify has some serious drawbacks, but don’t let those completely dissuade you from considering them as your e-commerce provider. All of the other platforms that we’ve experimented with have major disadvantages too. In the end, and for excellent reasons, we still chose Shopify to serve our online needs. The system is elegant and impressive in many ways, but do your homework before committing 100% to any platform.

For instance, variants as options might be limiting, but they are also powerful. Some third party apps are a disappointment, but others are stellar. Credit card processing and securing a domain can be complicated, but Shopify makes it easy to get started. Starting up a small or large e-commerce website can be complicated and time consuming yet Shopify does a remarkable job of efficiently simplifying the entire process.