Despite EW’s rating of a B, I did not expect to like the movie, Ant-Man. Paul Rudd as a superhero? No way. Although there were some dull moments, the movie actually pleases. Paul Rudd (Knocked Up, Anchorman) and Michael Douglas (Wall Street, Basic Instinct) certainly carried this movie, but the easter eggs, the banter, the action and comedy relief resulted in a pretty solid stand-alone hero movie that Marvel can be proud of. There were six scenes that arguably transitioned what should have been a mediocre film into a fairly entertaining experience. SPOILERS BELOW.

In the very beginning of Ant-Man, we are teleported back to 1989 to witness Tony Stark’s daddy trying to strongarm Hank Pym into revealing his secret formula and suit for resizing matter. We literally feel like this event was truly filmed way back in 1989 since Michael Douglas was brilliantly young-ified by some type of voodoo technology. 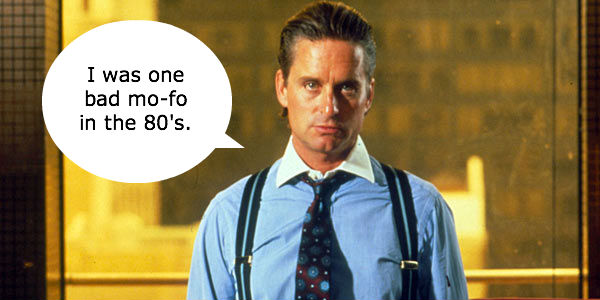 During the story, Ant-Man, needs to steal some kind of battery technology thingy from a vacant Stark owned facility, Unfortunately, that facility has new occupants – the Avengers. Scott Lang, our current Ant-Man, moves forward with his heist only to go head-to-head with Falcon (Sam Wilson played by Anthony Mackie) which was a pleasant surprise and very entertaining to watch. 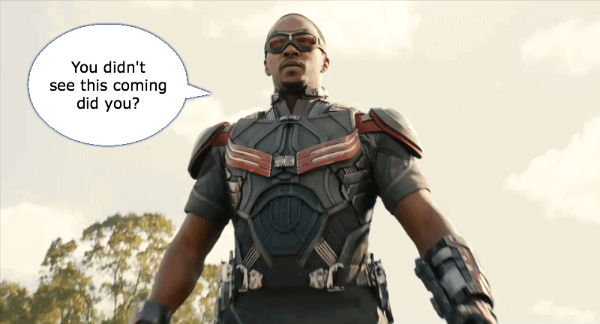 This movie could have soured at any moment. Two men fighting in power-rangerish suits while riding insects in the middle of a toy train set sounds dumb yet effectively entertains the audience. The rather long sequence where Ant-Man and Yellowjacket battle in everchanging settings was actually rather fun to watch. They fight in an airplane, inside a briefcase and within an average home that gets rampaged. Both fighters have a strange adoptive father relationship with Hank Pym that culminates  into a crazy brawl heightened by special effects that actually works in the movie’s favor. The film version of Yellowjacket may be a far cry from the comic version, but the character’s warped persona is a key component to the film. Yellowjacket is basically a berzerker doppleganger of Ant-Man that vindicates Hank Pym’s quest to hide his formula and suit. 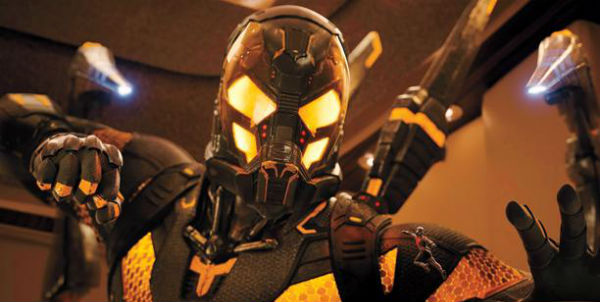 Ant-Man has a fair amount of well-timed comedy relief courtesy of Michael Peña (American Hustle) and T.I. (yes, the rapper). Peña’s character, Luis, a friendly small-time criminal, tells two tales of how he collected pertinent information. What makes these scenes so funny is we see reenactments of his stories where all the people are speaking in Luis’s voice. Michael Peña really does steal the show transforming a supportive role into a core and vital character.

One segment of the battle of tiny warriors involves the setting of a Thomas & Friends train playset. The directing during this series is brilliantly crafted since we get to see two viewpoints as fighting progresses. When we are watching from a little girl’s perspective, we witness pure movie gold unlike anything we’ve really seen before (aside from maybe Honey I Shrunk the Kids). Later, Thomas is actually transformed into a life-sized train which pretty much decimates what was once a lovely little home. 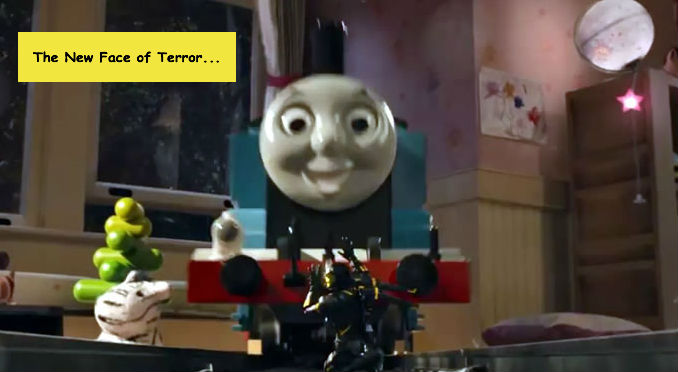 Bobby Cannavale (Boardwalk Empire) plays an annoyingly over-loving step-father who is also a cop which pretty much makes him worse than Yellowjacket in the eyes of Scott Lang. Cannavale’s reaction to seeing a dog-sized ant crawling down his home’s stairway is amazingly authentic. Do any of you remember when Joaquin Pheonix first saw an alien in M. Night Shyamalan’s Signs? If you didn’t, that’s too bad because you would swear he really saw a freaking alien. And I believed that Cannavele saw a huge freaking ant about to trample him.

For those that have reservations about this popcorn movie: Go see it. The movie is original and fun – a satisfying combination for summertime. Ant-Man is a worthy superhero flick but Marvel had to know it was a risky move. Ant-Man is sure to become a major player in the third act of the Avengers plotlines (Hank Pym is a founding member of the Avengers in the comic books) so buckle your seatbelt and enjoy the ride.

A few days prior to this post, we discovered some pretty amazing Ant-Man artwork and posters.