I absolutely love Pinterest. Most of the time, I am drawn to geek related pins especially that of illustrations and sequential artwork based on comic book characters, movie icons and television series. Here are just a few fellow talented pinners we enjoy following. 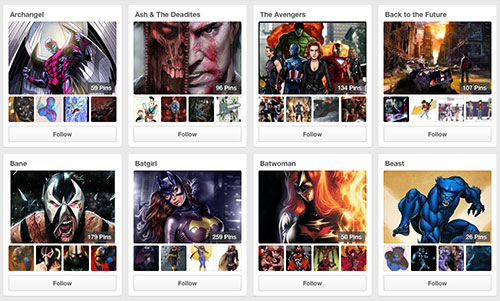 Brad’s pins are organized into character specific boards collecting images of all art styles which is pretty cool. From Avengers to Watchmen, Brad’s managed to collect quite an illustrative encyclopedia of the pop culture icons we love. 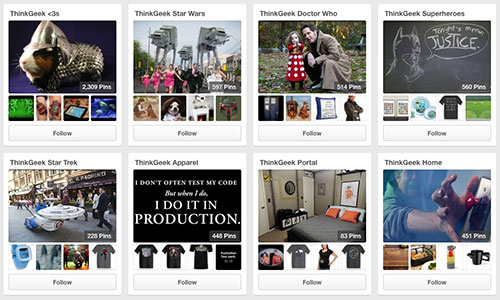 The hero obsessed nerd like me appreciates a cool store for geeky apparel and gifts. ThinkGeek.com’s Pinterest profile has one special board dedicated to unique superhero gifts offered by the company. ThinkGeek also hosts other boards many of us will appreciate including Star Wars, Doctor Who and Game of Thrones.

One fascinating board by Marcia, Superhero Spoils, showcases a variety of artwork, stamps, costumes, cookwares, desserts and more that are mostly based on Marvel or DC Comics. This board is filled with unique pins less prevalent with other Pinners. 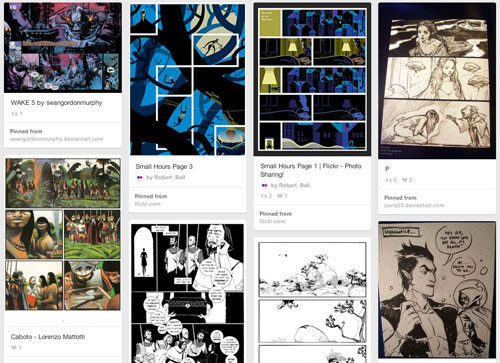 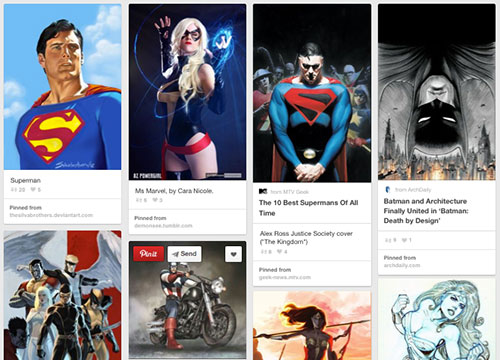 With over 11 thousand followers, the fairly anonymous Noone pins interesting images into a board called Clash of the Comics containing numerous highly detailed illustrations consumed mostly of Marvel and DC superheroes. 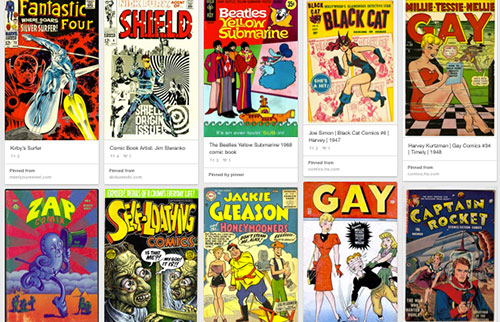 The Pinterest profile Newmanology belongs to Robert Newman, former creative director of Real Simple, Reader’s Digest, Entertainment Weekly, Cottage Living, Fortune, Vibe and Details. His boards are dedicated to mostly cover types such as comic book covers, LP covers, magazine covers and so on. Of course, our favorite board is comic book covers, but other Newmanology boards delve into logos, Playboy and a variety of artistic posters. 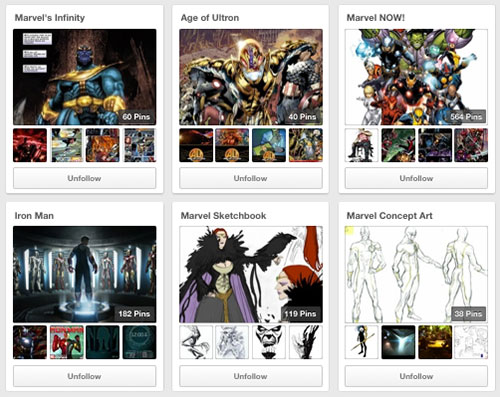 If you’re a comic book junkie then following Marvel Entertainment makes a lot of sense. The official Marvel Pinterest profile offers boards for major super heroes and villains along with interesting boards covering concept art, Comic-Con, HQ stuff, movies and C2E2. I was disappointed that Image Comics (The Walking Dead, Spawn) was without a Pinterest account, but DC Comics doesn’t disappoint.

Art Director and Designer, Oen Hammonds, is a talented pinner teaching at The Austin Creative Department who not only showcases his own work (primarily print based), but also compiles a board dedicated to Mango, Anime, Comics and Sci-fi themed imagery. One board focused on branding is also particularly fun to review.