Last week, our art director, Jane, took a week vacation to the Bahamas. We thought she was going with her husband, but Mr. Keg was MIA all week. Either her husband Scott was spending too much time in the casino or was mysteriously dumped overboard. Mr. Keg is way too nonconfrontational so we’re guessing Scott is laying face implanted inside a toilet. 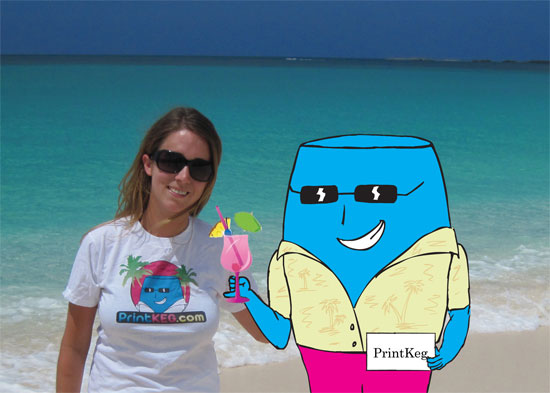 UPDATE: Mr. Keg, a mascot we do not use anymore, was originally created by Jane. Later, two more versions of the character would be adopted before finally being retired late 2014. In the beginning, he helped us differentiate ourselves from other printers, but as copycat cheap printing companies emerged and invented their own silly mascots, we decided Mr. Keg’s time with the company had passed.

Jane is no longer with us, and we miss her. She handled marketing, customer service, sales and office management for four years and was a pivotol part of our organization. She eventually ventured out into the world of entrepreneurship, and we wish her the best of luck. How many employees would sport a work shirt while on vacation?

Note from Printkeg – As we go back to old posts and update them, we are trying to delete pages that might be considered as low quality content by Google, but some articles, such as this one, are wonderful ways to document and remember our company’s history. This is why we have chosen to simply add content to this page with updates.