Why some of us are so obssessed with a rising Apocalypse, I will never know, yet I love it. The upcoming Avengers: Age of Ultron will explore artificial intelligence and technology’s impact on humanity, a storyline that dates back to Mary Shelley’s Frankenstein, one of the earliest examples of known science fiction. I guess we could compare Tony Stark to Dr. Frankenstein and Ultron as his monstrous creation – both creations that turn into killers with an Oedipus Complex. It is worth mentioning as a fun fact that Dr. Henry Pym (aka Ant Man, Giant-Man or Golliath) creates Ultron in the comic books and not Tony Stark.

To celebrate the soon-to-be blockbuster, we thought it might be fun to check out Ultron based artwork on the artist network, Society6.

This first peice of artwork by Azzazzyn would look amazing as framed artwork or printed on canvas. Eagerly anticipating the new Avengers sequel, this artist creates a minimalst rugged appearance highlighting Ultron’s wickedness.

“Hello, organic children of the planet Earth. The Age of Ultron is upon you. Assimilate or die. Ultron cares not what you choose, frail, inferior species. This is your Doomsday.” 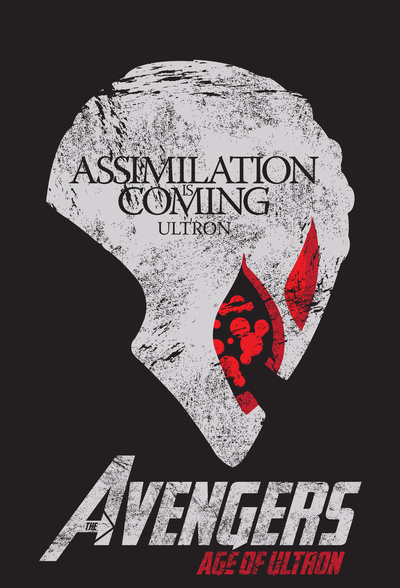 The United States of Ultron

“The streets are riddled with destruction. Panic and fear have set in. Ultron, a pyschopathic robot, has set his path to exterminate the human race. Can the Avengers stop him? or will The United States of America merely be his first conquest?”

This black and white masterpeice (also by Azzazzyn) mashes our American flag with Ultron to create an image of a ripped flag representing Ultron’s hostile takeover of our country. Many of us at the office think this would look killer printed as a gallery quality Giclée print. Of course, Ultron plans to destroy the entire human race and not just the United States. 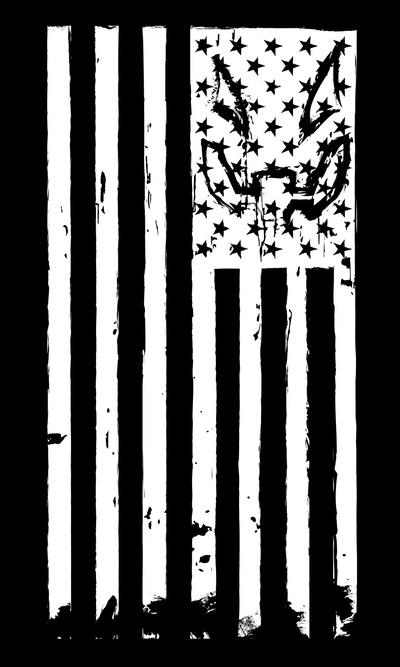 You Are All Puppets

An underlying theme of the Ultron storyline embraces the idea that artifical intelligence could inevitably allow robots to eventually outsmart and terminate humans. Heck, even in present day, real public figures such as Elon Musk and Bill Gates have already revealed their concerns with artificial intelligence further feeding the frenzy and possible government intervention. Artist, Edward J. Moran II, envisions his own minimalist version of the Avengers: Age of Ultron movie poster. 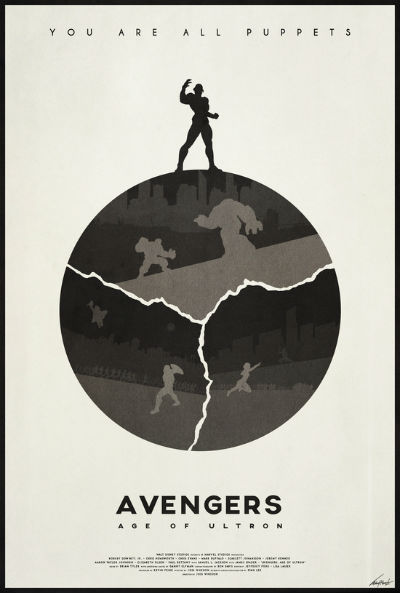 Marvel.com’s official synopsis of Ultron is as follows:

“Arguably the greatest and certainly the most horrific creation of scientific genius Dr. Henry Pym, Ultron is a criminally insane rogue sentient robot dedicated to conquest and the extermination of humanity.”

If you are an artist on Society6 and recently made an Ultron print idea, we’d love to feature your print on this post and link to your profile or item.