For the last couple days, rumors have been floating that a new Star Wars: The Force Awakens film poster would arrive on October 18th followed by a full-length trailer on October 19th during Monday Night Football on ESPN. Those rumors first started at io9.com, but it didn’t take long to garner the attention of comicbook.com, screenrant.com, and fortune.com. It appears those rumors are very true now that we’ve finally seen confirmation from EW.com and Mashable.com. 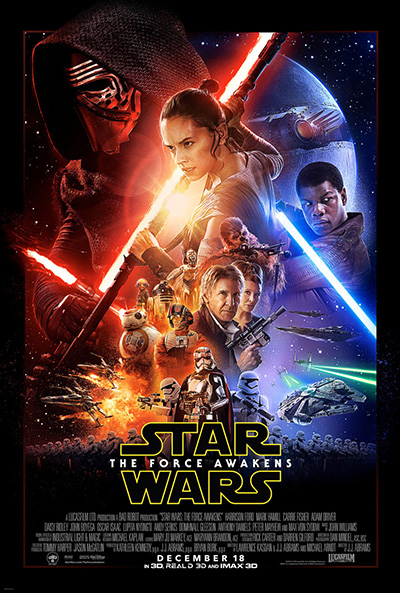 As always, Disney and Lucasfilm are only providing us with breadcrumbs by adding Princess Leia who appears quite solemn.

The one character NOT present is causing quite the stir. Where the heck is Luke Skywalker? Mark Hamill’s character was MIA from the previous teaser trailers, this new Star Wars 7 poster, and it is likely he will not appear in the new trailer on Monday night.

Many people speculate JJ Abrams and crew is smartly building up anticipation for the movie by withholding Luke’s presence. Everyone can agree that Luke’s absence must be significant, but is there hidden meaning in all this or is it simply a marketing ploy? We have some theories.

My worry is that JJ Abrams will kill off Luke in an attempt to parallel the original movie. Obi-Won Kenobi is also not featured in 1977’s Star Wars movie poster, and the Jedi Master died by sacrificing himself to force Luke to step up and face Darth Vader. Will Luke be required to make this same decision?

Here’s something else to think about: With Obi-Wan hanging around, Darth Vader and the Emperor wouldn’t seem so frightening. Obi-Wan had to die. Luke might be dead thirty years later for storytelling purposes. Would Kylo Ren and Snoke be able to emerge if Luke Skywalker was out there fighting with the resistance?

It is very likely that Luke Skywalker is being withheld for marketing purposes. If you want to see the great Luke Skywalker in action, then you’re going to have to buy a ticket. This marketing approach is the most likely scenario since we’ve waited almost forty years to see him again.

Theory #3: Luke Turns to the Dark Side

Dark side characters, General Hux and Supreme Leader Snoke, are also notably missing from the new “Star Wars: The Force Awakens” poster. In our minds, there is no way Luke turns to the dark side. He represents everything good about the light side of the force, and that turn of events would betray everything we witnessed in the original trilogy. My entire childhood would feel like a lie. However, his turning would certainly be shocking and tragic.

Theory #4: Luke is Barely in the Film

Some people are speculating that Luke’s role in the movie is so small that it doesn’t warrant a spot on the new poster. One Twitter fan reasons we may only see Luke in flashbacks because he’s dead (See Theory #1). Why on Tatooine would JJ do this to us? He clearly has to be a focal point of the new trilogy right? RIGHT??

Luke might be missing from the poster as a metaphor for him missing in the movie. Part of the storyline could include the widespread search for the most popular Jedi in the galaxy. Maybe he is secluded somewhere in the Degabah system or has been kidnapped by bounty hunters. Maybe we won’t see Luke until the very end of the film during a majorly twisted cliffhanger.

The new trailer is expected to arrive on October 19th around half-time during Monday Night Football on ESPN where the New York Giants face the Philadelphia Eagles. Tickets are expected to go on sale that very same night.

Once we’ve seen the final trailer, we will update this article with more thoughts about Luke.