Most of us here at the office are pretty psyched about The Amazing Spider-Man 2 to be released May 2nd. Although it appears we may yet again become acquainted with The Green Goblin, there are two other major villains being introduced on the big screen for the first time – Rhino and Electro. Both of these guys are early foes of Spider-Man dating back to the 60’s. Honestly, I wasn’t a huge fan of the first Amazing Spider-Man movie, but this sequel looks like it will be absolutely epic.

***
Spoiler Alert – Although I have not seen the movie and have no inside knowledge, I did read the The Amazing Spider-Man comic book series for a very long time. This next section could possibly reveal huge plot twists based on my own observations. You’ve been warned.
***

The Green Goblin Is Back

Gwen Stacy’s death had an enormous impact in the world of comic books. Aside an origin story, superheroes did not fail so catastrophically; nor did a loved one of the superhero die so suddenly without warning. Because of this, some fans and historians take the death of Gwen Stacy as one marker of the end of the period referred as the Silver Age of Comic Books.

EW was able to give us a closeup look thanks to Sony. 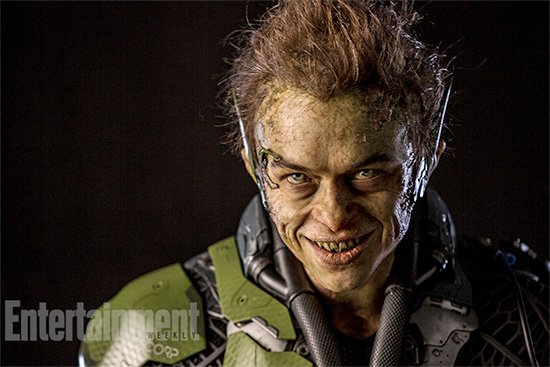 In the movie, Rhino seems more robotic like a ‘mech warrior’ to serve a more contemporary audience. A strikingly different appearance than what comic book readers know, this drastic makeover is probably a necessary move. Also, actor Paul Giamatti might bring depth to an otherwise flat character. I think once CGI is added, the final outcome on movie day will look awesome. 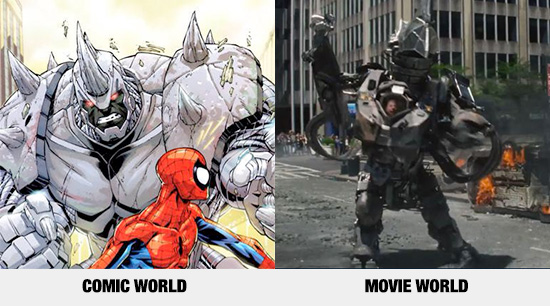 In 1966, Rhino, a thug for hire, made his first appearance in The Amazing Spider-Man #41 comic book in a story arch lasting until issue #43. Aleksei Mikhailovich Sytsevich volunteered to participate in an experiment that bonded a super strong polymer to his skin, thus augmenting his strength and speed. Peter Parker’s long time romantic partner, Mary Jane, makes her own first full appearance in this issue as well, a fairly ironic ‘coincidence’ since the latest movie trilogy embraces Gwen Stacy. After realizing he can’t win based on strength, Spider-Man defeats Rhino with dodging and webbing strategies. Through the next few decades, Rhino will make impressive debuts in the world of Marvel including a futile attempt against The Hulk and embarrassing plots involving S.H.I.E.L.D, Punisher and Deadpool. Despite defeating Thor one time (with Electro’s help), Rhino is pretty much considered a low level super villain. 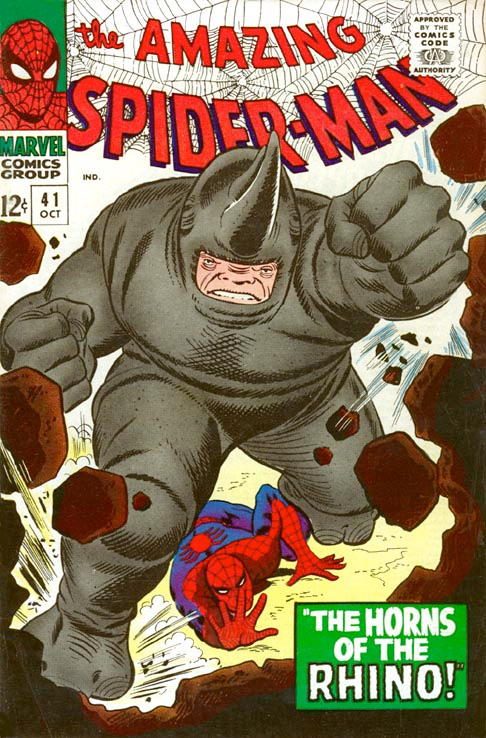 Back when Toby Maquire played Sam Raimi’s version of Spider-Man, I was hoping to one day see movie version Electro and now that is finally happening. I guess there’s something alluring to possessing a generally offensive and devastating ability such as electricity-based powers. The onscreen character looks nothing like the paper version, but like Rhino, that’s probably a good thing. Although I’m a huge Electro fan, the comic book character is dated and flat. Since Academy Award winner Jamie Foxx was selected to play Electro, we will hopefully see a more rounded tragic character. 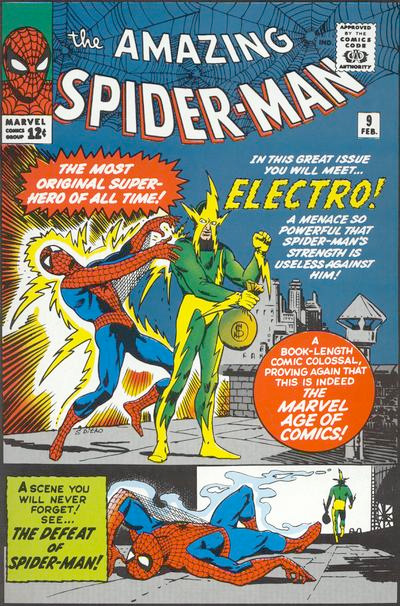 Electro first debuted way back in 1964 in The Amazing Spider-Man #9. A lifetime electrician, Maxwell Dillon was struck in a freak lightning accident and was mutated into a human lightning capacitor. Initially, Electro’s powers were weak and he interestingly stole parts from Stark Industries for recharging purposes. He was soon confronted by Magneto to be recruited in his Brotherhood of Evil Mutants. Electro passed on Magneto’s offer and eventually became a lifetime super-criminal. Although he is extremely powerful, Electro is often defeated by low level heroes such as Spider-Man and Daredevil who eventually outsmart him. Electro has crossed paths with The Fantastic Four, Doctor Doom, Kraven the Hunter and is a member of the infamous Sinister Six, a group specifically created to defeat Spider-Man.

There are an exhaustive amount of routes for The Amazing Spider-Man 2 to explore. I think we will see some revolutionary special effects and plain fun storytelling which will leave fans changed forever.