UPDATE 5/15: We no longer participate in MySpace. In fact, we’re not even sure it’s actually a social network anymore. When Myspace first relaunched with Justin Timblerlake as a major investor, we were excited, but that initial response was rapidly deflated once the new website emerged. You can check us out at Facebook, Instagram(@printkeg) or Twitter (@printkeg). 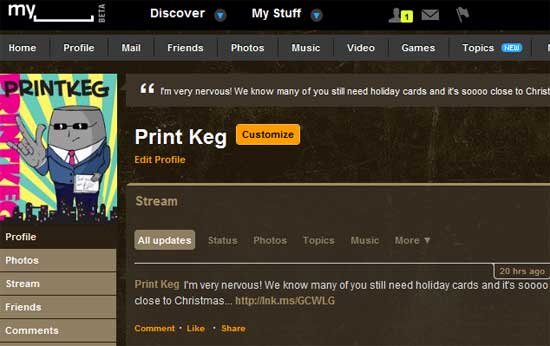 MySpace is actually the first social network in which we dabbled in, but we took a long hiatus and focused more on other networks since the account was actually started by an ex-employee and we couldn’t figure out how to log in! We should have turned this over to our beloved geeks in the web department much sooner, but we were so busy with Facebook and Twitter that we procrastinated an entire year away! Ouch!

But we’re back and we’re big fans of the new MySpace design and logo. MySpace is dedicated more towards music and entertainment now and that niche actually makes us more interested in MySpace than ever before. We print tons of 11×17 posters, flyers, CD covers and custom t-shirts for bands, musicians, artists and producers.

If you have a MySpace account, we would love to be your friend! Update: We are pretty dormant on MySpace, but please feel free to connect with us via other social networks.

Back in 2010, there was a mass boycott of MySpace that was called “Quit MySpace Day” which we did not partake in.

MySpace is still a social network that is music oriented and backed by Justin Timberlake.

Many people know that News Corp purchased Myspace for $580 million in 2005 and sold it for $35 million in 2011. The company didn’t necessarily lose money on the deal since the site generated $800 million in 2009 alone.